An online master in media and communication studies: reflections after one term

In the fall we started our new master’s programme in Media and Communication Studies at the School of Arts and Communication. We have had an undergraduate programme since 1998,and a PhD programme since 2010. Given that, adding a master’s programme was a logical thing to do. However, it was not inevitable which focus it should have, or which form. After thinking this through closely, and after discussions with students on the undergraduate level, discussions with representatives of the creative industries, and after analyzing closely other master’s programmes in media and communication studies, both Swedish ones and others, we decided to go for an online programme with a specific focus spelt out in the subtitle: Culture, Collaborative Media, Creative Industries.

In choosing focus for the programme, we worked very hard in assuring that this would be a programme of interest both for students wanting to continue after the master to a PhD education, and for students wanting to move into the workplace after obtaining their degrees. This dual focus was something we felt many other programmes lacked (as we saw it, most similar master programmes seemed to view the programme as a programme preparing for PhD students although many prospective students feel they want to work afterwards). We therefore made clear that the programme would give both theoretical/critical and practical skills. We phrased it like this: “You will work creatively and in an explorative fashion with different types of media while you learn to approach them from a critical perspective.”

Choosing an online format was based on the idea that if you offer a degree in media and communication studies, then part of the programme should consist also of experimenting with its pedagogical setup, and using media to do so. Collaborative media, to be more exact: we see media as something that you should work with collaboratively, both when you design the media infrastructure and when you produce media content (and as we all know, media are increasingly being consumed in collaborative ways). 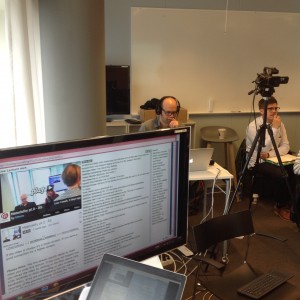 Hugo Boothby, producer of our video lectures. in front you can see the ongoing chat between students and moderator.

We had no ideas of knowing how many would apply, but were extremely happy to realize we had more than 500 applicants from over 50 countries! We admitted about 60, and we are now about to finish the first term. Students attend the programme from many parts of the world, including England, Germany, Greece, Turkey, The United Arab Emirates, The United States and Canada. We also have about twenty students that live in the Malmö region, meaning that they can take part of the lectures physically if they would want to. On our Facebook page, you can read interviews with three of the students, Deliana Iachoban, Oisin Share, and Hannah Lemoine. 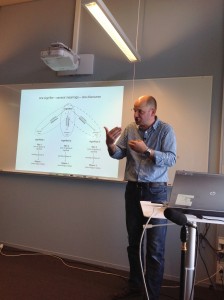 The set up for our lectures consists normally of one person lecturing, one person editing the video production (using three different cameras) and one person moderating the chat with the online students. Normally the lecturer is in Malmö, but he or she could also be at some other place. For instance, in the introductory session to the programme, we organized a panel debate on the topic of “Media Research and the Changing Media Landscape.” Three of the participants were in Malmö: cultural historian Temi Odumosu and our two media studies senior lecturers Michael Krona and Pille Pruulmann-Vengerfeldt. But online from Atlanta we had Jay Bolter, author of “Remediation”. I moderated the panel and you can watch it here. 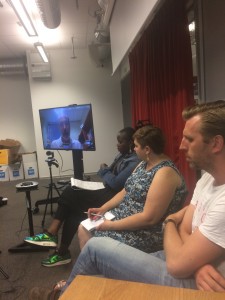 So far, only the first course has finished: “Key Themes in Media and Communication Research”. Lectures given during the course included:

Pille Pruulmann-Vengerfeldt: Mediatization in research and in everyday life

Tobias Denskus: A globalized world – From the Marshall Plan to a mediatised industry

Below you can see a short movie made by Shaun Weston Nystrom, one of our students.It is made in relation to one of the assignments in the “Key Themes” course.The film is called ‘Selfie: Framing the Modern Self-Portrait’ and treats the subject of selfies and what role it has in our lives, in our society and in human communication.

The second course, “Understanding the Creative Industries”, will finish next week. This course has been based partly on input from people within the creative industries. Jesper Larsson, CEO of Malmö Live, has already been mentioned. Other guest lecturers have included Måns Adler, founder of the live streaming service Bambuser, Emma Estborn, Head of Business and Development, and Collaboration Strategist for media cluster Media Evolution, Martin Thörnkvist, director of influential media and design conference The Conference, Kerstin Übelacker, director of documentary film Ghost Rockets, Markus WIklander, CEO of music service Emues, and Åsa Skogström Feldt, CEO of theglobal momevent The Hunger Project. Another guest lecturer was Mary Brydon-Miller, professor at the University of Cincinatti, and one of the world’s leading action researchers. Her talk “Then Let Us All be Monsters: Tackling Tough Issues Through Action Research” is available below.

The programme will continue this term with courses on Collaborative Media and on Methodology. The term will then finish with the writing of a Master’s thesis. And as of January 1, I have stepped down as programme director. That job is now handled by my colleague, Pille Pruulmann-Vengerfeldt.