I never talked to Bob Dylan

One of the most significant cultural events of 2016 was the nomination of Bob Dylan as the Nobel prize winner for literature, and the subsequent award ceremony in the Stockholm Concert Hall, where Patti Smith sang Dylan’s “A hard rain’s a-gonna fall”. Her struggle with getting through the song is captured beautifully by American rock critic Amanda Petrusich in an article in The New Yorker, and Patti Smith has also commented movingly on the evening in an article in the same magazine.

40 years earlier, Patti Smith also performed in the Stockholm Concert Hall. I was there for the encore only. But I did get to meet Patti Smith, and what happened that evening could maybe be of interest in relation to what happened this year. I wrote a short article about this for the Swedish daily newspaper Sydsvenskan, which was published a couple of days after the prize ceremony. It can be found in Swedish here. Below is an English translation of it.

I never talked to Bob Dylan

1976. Patti Smith is about to play the Stockholm Concert Hall for the first time ever. Together with a close friend, I go there by train from Gothenburg. But there is an accident on the way and we arrive only in time for the encore.

Disaster. In a last desperate attempt to still get something out of our journey, we move to the back of the Concert Hall. We catch a glimpse of Patti Smith getting into a car. Naively, we hail a taxi, and get to say “follow that car”. The trip ends outside a hotel. We sneak in, take the elevator to the top floor and take the stairs down. On one floor, a number of hotels doors are open. We glance into the biggest room and we see Patti. We walk up to her and start telling her about our escapade, and why we are there. She listens intently and seems to understand our joy in finding her. Her comment indicates her identification with us at that precise moment: “I never talked to Bob Dylan”.

A couple of months later, a bootleg is released from the Stockholm concert. Swedish public service television has recorded the concert, and some one has gotten hold of the sound tape. My friend is involved in the production of the bootleg, and has the final say on the name of it. With its superior sound quality, ”I never talked to Bob Dylan” becomes the arguably most talked about Patti Smith bootleg ever. Few people understand where the name comes from. 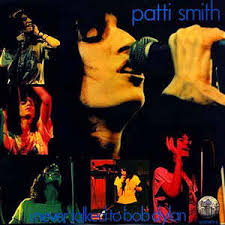 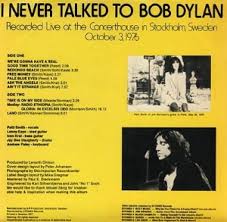 40 years later, Patti Smith returns to the Concert Hall, this time in honour of Bob Dylan getting the Nobel prize in literature. She sings Dylan’s haunting “A hard rain’s a-gonna fall”. The song is written in 1962 during a period of nuclear war threat, but is based on a more than 200 year old folk ballad. It is both contemporary and timeless. Two minutes into the performance, she gets lost. She is nervous, but takes up the song again, sounding more and more powerful for every verse. It is a celebration of Dylan, but it also places him in a historical tradition. And it confirms her place there, next to him.